Tate’s Comics, inc. is the brainchild of Tate Ottati, who as a seventeen year old high school senior, opened his store on March 28, 1993. While “playing” his high school economics class’ stock market game, Tate also invested in Marvel Comics stock in real life. He and did very well in the “game” as well as in the “real-life” stock market! Lucky for Tate, he sold the Marvel stock when it was at the highest it was ever going to get. Shortly after he sold it off, Marvel went bankrupt and the stock was not publicly traded for a few years. That original Marvel seed-money helped to open the store! With the help of his supportive father, Tony Ottati, Tate opened the doors to Tate’s Comics, Inc. In those first months, the store was only open when he was out of school, 3-8pm! 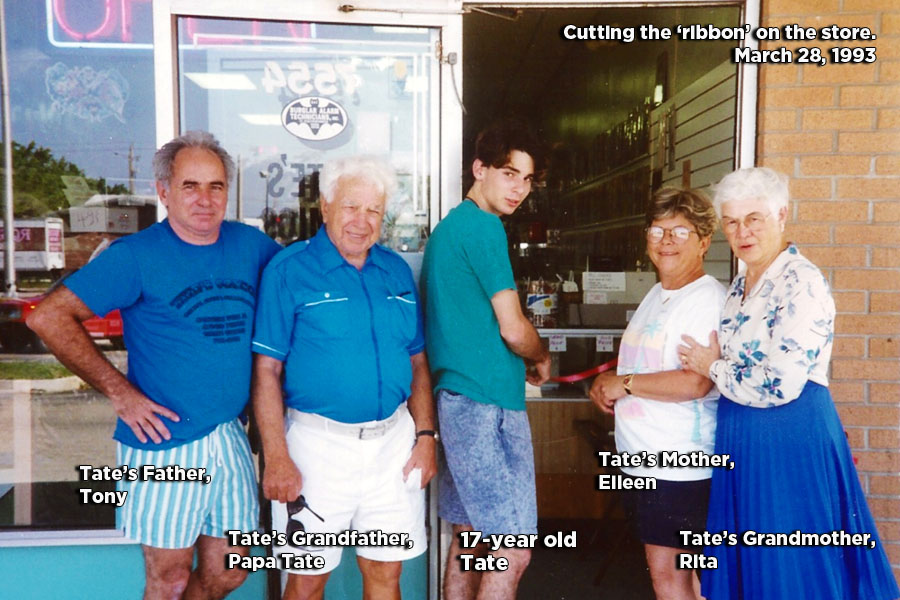 Tate’s first location was a 1,000 sq. foot store that was home to all his favorite things… featuring a variety of comics, graphic novels and toys. With Tate’s youthful eye for new merchandise and personal taste, the store did well and expanded quickly. Within two years the store was moved to a larger location around the corner, 4942 was the address number. Tate soon expanded the store’s merchandise to include Japanese animation videos, Japanese comics and garage model kits. In 1995 anime and manga was very hard to find and word quickly spread that there was a local store catering to this “new” medium! That same year, TATE’S began renting rare Japanese anime import VHS videos to South Florida customers, who were thrilled to have the opportunity to see at home what was mostly only shown in anime fanclubs at the time. This was 1995 don’t forget… the internet was just getting started! 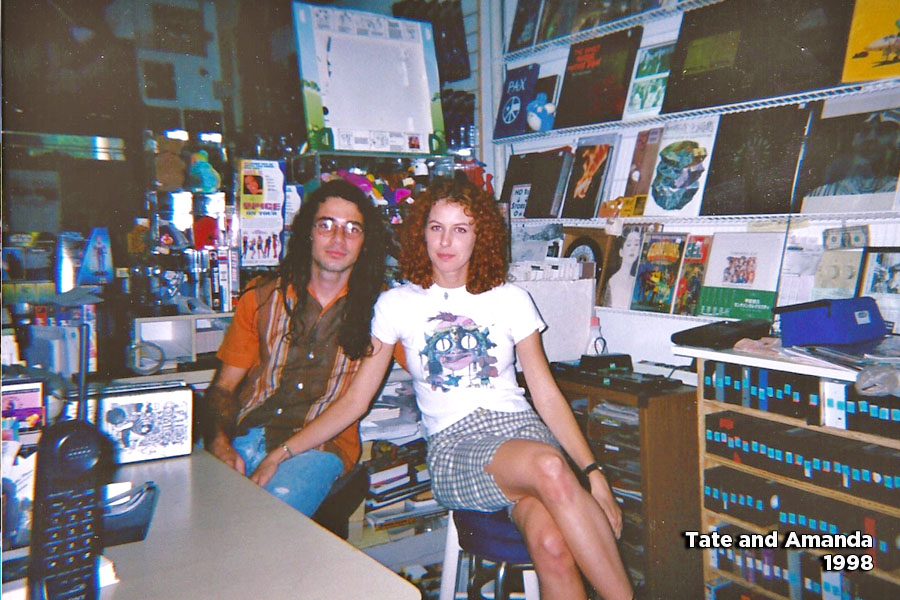 In 1996, Tate met his wife Amanda (who was a customer at the store, of course) …and as the years passed she began to contribute her favorite things to the store’s offerings as well. By ordering a small selection of lowbrow art and popular culture books, as well as adding cult/horror movies to the video & rental sections the store became even more diverse. Then, in 1997, JoAnn (currently store manager)  joined the TATE’S family. She was just a 16 year old high school gal when she started, but her passion for Sailor Moon and all things anime led to the further expansion of TATE’S rental selection and anime merchandise. The store now had just the ingredient it needed to grow even more, a woman’s touch! See what our store looked like back in the year 2001... and also gawk at some photos documenting our big move out of there! What an undertaking!

After a successful 7 years at TATE’S 4942 location, it seemed that we were bursting at the seams with merchandise and ideas! 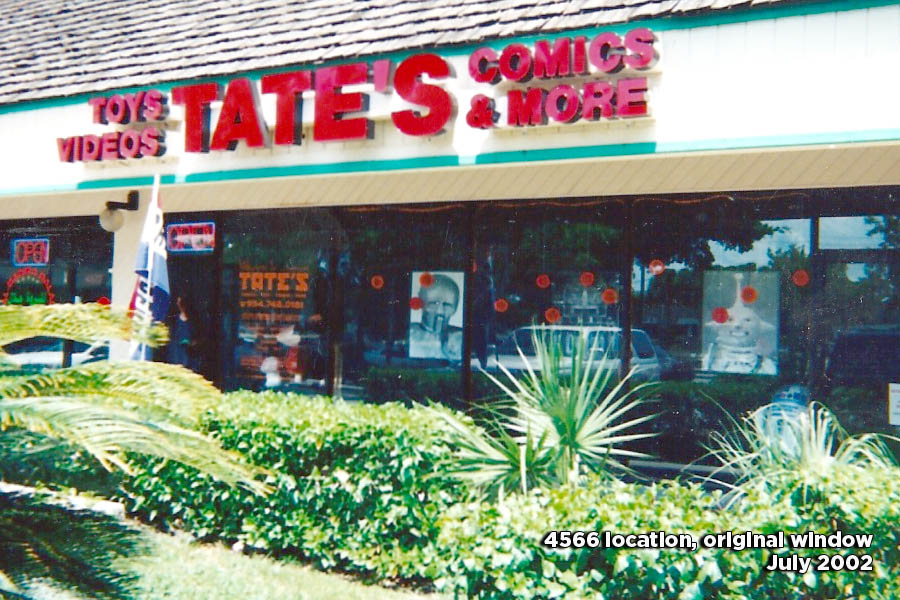 Tate decided to move his shop up the street, to a much larger location in Lauderhill’s historical “Promenade Shops”, which was once home to the local indie record store Uncle Sam’s. After spending nearly 6 months working on the  design & ‘theme’ of our new 4566 superstore, the doors were opened to our current location on July 31, 2002. See photos of the work in progress, way back in ’02! The store was bigger, better and cooler than ever before, we were really excited to offer our customers more merchandise and a more unique shopping environment! We had some fun things when we first opened this location… in addition to all the artwork & sculptures that remain on the walls today, we also had an actual photobooth (which was always breaking down, so we had to get rid of it… sad) and an original Tron standup arcade game (same sad story as the photobooth).

Even with the truly wide variety of merchandise that TATE’S carried, there WAS one thing missing… games and a place to play them! In response to an outcry of customers looking for “a better place to game”, in October 2003, TATE’S Gaming Satellite was opened. It started out as a tiny 500 square foot shop, just a few doors down from the “big” store, and had a full selection of gaming merchandise and supplies – including tables for gaming, tournaments, snacks and drinks. The Gaming Satellite was a success and quickly outgrew it’s first home. In March 2005, TATE’S Gaming Satellite relocated a few doors north into a much larger 2,000 square foot location. It now offers more merchandise and lots more room for gaming!

Tate had always dreamed of expanding the store “just one more” time… somehow we still needed more space! So, when the tenants on our north side left the shopping center in the summer of 2006, Tate’s dream became reality. It was quickly decided that TATE’S would expand once more, this time an additional 2,000 square feet – bringing our store to a total of over 6,000 square feet!! The huge wall between the two bays was removed and after much work on everyone’s part the expansion project was completed in October 2006. But wait! We’re not done yet! In January 2015 we took over the empty store on our south side, expanding the main headquarters to over 10,000 square feet!

Part of Tate’s “expansion dream” was to include an art gallery and boutique inside a 700 square foot loft area that was upstairs in this new section of the store. So, after many years of working full time elsewhere and helping to run the store, Amanda quit working for ‘the man’ and started working for ‘her man’! Dubbed Bear and Bird Boutique+Gallery, it features original artwork, gallery shows and unusual merchandise! Opening for the first time on February 3, 2007 with a massively successful first art show, For Love of Munny, the gallery was off to a great start. With a focus on new artists and creating new art collectors, Bear and Bird is a perfect compliment to the varied people and merchandise that have made TATE’S successful since it’s beginnings.

In 2009, we were awarded the prestigious Will Eisner Spirit of Comics Retailer Award! The Eisner Spirit Award is presented annually at San Diego Comic-Con, “the largest comic book and popular arts event in the United States”. Since 1993, The Eisner Spirit Award has been presented to an individual retailer who has performed an outstanding job of supporting the comics art medium both in the community and within the industry at large”. It really and truly meant a lot to Tate to be recognized by the industry and his peers.  It is an international award that can only be given once per store’s “lifetime” and we couldn’t be more proud and honored to have won!

After many, many years of spending all their time and energy on making the store a better place, Tate and Amanda started a family. Rosemary Jane was born on her mother’s birthday in May 2010 and spent most of her first two years ‘working’ at the store with her mom. She was often on hand to ‘rearrange’ the shelves and smile sweetly at customers, she loves visiting ‘daddy’s store’. In March of 2012, the male heir was born. Named after his father (of course) little Tate Wolfgang is still too little to realize that he won the kid lottery! Both of the little kiddos are usually present at our many special events, but spend more time at home now. Two munchkins running around is just too much destruction… even in an over 6,000 square foot store! But, it is only a matter of time until we put them to work pricing merchandise and running the register! You can be sure that these two little people will transform and improve our store even more in the years to come! We take pride in always evolving and changing, while still staying true to our roots. 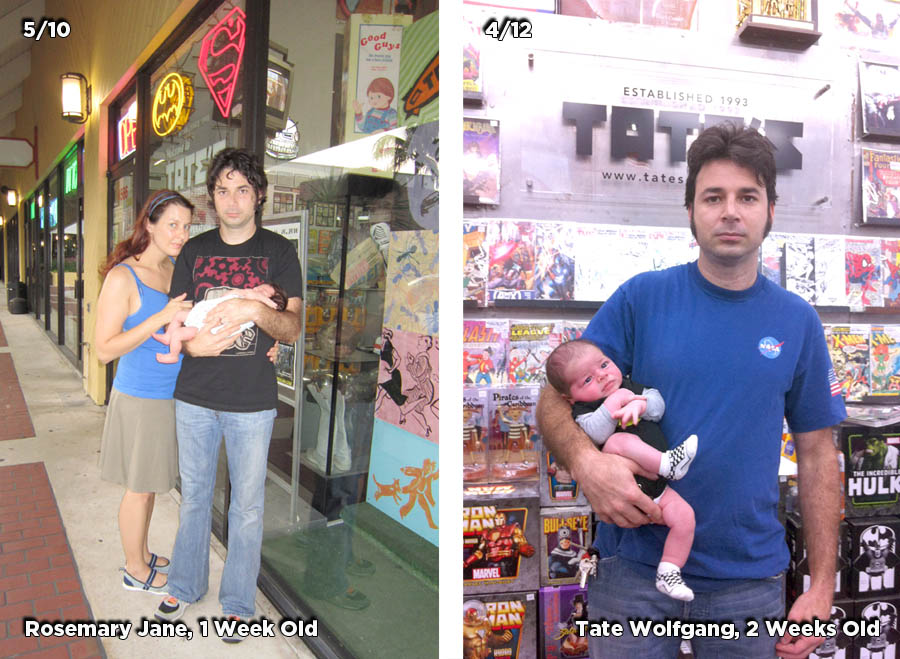