In 2009, TATE’S Comics was awarded the prestigious Will Eisner Spirit of Comics Retailer Award! The Eisner Spirit Award is presented annually at the San Diego Comic-Con, “the largest comic book and popular arts event in the United States”…

It is an international award that can only be given once per store’s “lifetime” and we couldn’t be more proud and honored to have won!

Since 1993, The Eisner Spirit Award as been presented to an individual retailer who has performed an outstanding job of supporting the comics art medium both in the community and within the industry at large.” Curious about which stores have won an Eisner? Check out the list of other past winners here, it includes some of the best stores in the world and we are truly proud to be listed among them.

Here is some great press about our big Eisner win!

This video here is what we submitted to the Eisner judges in 2009.

The video was intended to show the judges the layout of your store and give an idea of what you’re about. JoAnn did a great job hosting this one! It really only focuses on the comic related areas of our store. The official Eisner submission videos are restricted to 5 minutes or less, which was really difficult for us to keep to… there was just so much we wanted to include!

We couldn’t believe it when we won! It really meant a lot to us to be recognized by the industry and by our retail peers.

Check out the Archive video of when they handed us the Eisner Award!

We decided it would be fun to have a little celebration at the store once we finally received our actual ‘award’, it took a while to arrive and when it did we decided it needed MORE BLING! So we mounted it atop a giant trophy. The lil top acrylic piece is the ‘actual’ Eisner award if you were wondering. 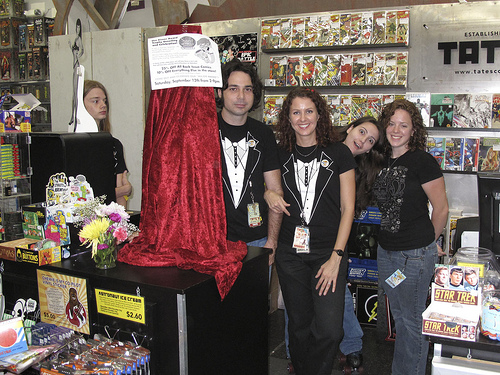