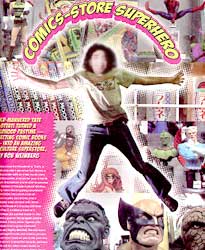 When you cross the threshold to Tate’s, a pop-culture junkie’s paradise that shares a shopping center with an indie music store
and a tattoo parlor, prepare for your mind to be blown. If somehow you’re able to process even a fraction of the pop-cultural detritus, you may notice the boggling assortment of anime DVDs; the colorful riot of Japanese snacks and drinks; and a prop display case stocked with items such as the head of a Chucky doll from Child’s Play 2, a rubbery hand of a creature from the cantina scene in Star Wars, and a gopher handpuppet used in Caddyshack. Fierce action figures offer mute tribute from a glass-enclosed Valhalla, and highly detailed, life-size busts of Marvel superheroes and villains grimace and gnash their teeth as you make your way into the store’s overstuffed innards, perhaps to check out the latest comic books or graphic novels that have been Tate’s stock-in-trade for more than a decade.

And if you manage to tear your gaze from the extraordinary feast of eye candy and look upward, you’ll be greeted by a pair of winged metallic sentries keeping silent vigil from their perches; a fearsome, bloodshot eyeball balanced on a spidery tripod; and enormous, rust-colored gears and pistons that line the entranceway wall. The dazzle, owner Tate Ottati says, is by design – specifically, the imaginary design of a robot pavilion that might have appeared at the 1939 World’s Fair – even as he acknowledges that the experience can be a bit overwhelming.

“I think people get intimidated who are just comic book fans and don’t realize that you can walk past all the other stuff and then see a giant portion of comic books,” Ottati says. He walks through a stock room to his crowded, tiny office – formerly a bathroom, complete with a commode right next to his desk and eMac – in the back of the store. Harry and Artie, a pair of extremely friendly mutts rescued from the pound, inquisitively follow their owner, a longhaired, genial renaissance man who’s currently studying kendo, the martial art of stick fighting. His store, in its fourth incarnation, will celebrate its 12th anniversary this weekend with a blowout sale. “Our comic book section is really big, like a third of the store,” he says.

In Tate’s childhood, he visited a store called Phil’s between Rock Island Road and U.S. 441 that’s still there today. A voracious comic book reader, Tate amassed quite a collection. However, when he tried selling some of it to the stores he frequented, he got no takers, only advice that he peddle his wares at comic book shows. With the help of his dad, Tony Ottati, Tate did just that until fate and the stock market intervened.

As part of an Advanced Placement economics class project at Deerfield High School, where his dad taught industrial arts, Tate invested an imaginary $100,000 in Marvel Comics stock. The stock did so well that he amassed the greatest gain of any student in Florida and finished behind just two others in the United States. Of course, not all the investing was imaginary, as Tate put some of his own savings into Marvel, which was doing phenomenally well in the early 1990s.

“We started out with 100 shares,” relates the gruff but soft-spoken Tony, sporting a Bada Bing T-shirt and working behind the counter of his son’s store. “Then, he had 800 shares. And the stuff just doubled and split, doubled and split, and then, we got out.”

With a $40,000 windfall, Tate, who was just 17, had enough capital to open his first store in 1993, starting out with just his own comic books and childhood toys. In the late ’80s, speculative collectors were fueling the market, buying multiple copies of big, event-type books such as The Death of Superman and hoping to make a killing. Before long, though, the trend started to fizzle.

“At the time we opened up, it was the worst time to open a comic book store,” Tony says. “The hype of the market started to downslide, but [Tate] had the foresight to diversify. We put toys in, anime, a lot of pop-culture stuff.”

Tate winces when he recalls his early experiences, purchasing far too much inventory for the waning collector’s market, and wonders how he ever survived. However, he not only survived but also thrived. The current store, formerly a gymnasium, boasts some 4,000 square feet of pop-cultural wonderment. To realize his vision of a retro-robot showcase, Ottati called upon his friends Skot Olsen and Colin Christian, stars of the lowbrow art movement. Although the redesign took four months to complete, Tate says it was worth the trouble. However, when he opens his next place, he hopes to have it down to a science.

Cue the sound of a needle scratching a record. When he opens his next place? “As soon as the bay opens that I want in this shopping center, we’re going for it,” Ottati affirms. Having submitted an intent to rent to his landlord, Ottati already has grand plans for the 8,000-plus-square-foot space, including an expanded graphic novel section and an art gallery for local and lowbrow artists. The art connection seems logical, given the nature of Tate’s business and interests, not to mention those of his girlfriend, Amanda Magnetta, an artist who also works as an ad designer for the Sun-Sentinel and with whom he shares a house in Sunrise.

“When Amanda got into the store, it evolved again to get into art books and the kind of pop-culture stuff that more females are into,” Ottati says. “And it kind of went from a comic-book-guy’s comic book store to a pop-culture store.”

While neither he nor Tony professes to seeing any drastic change in the customers over the years – generally 18-to-50-year-old white guys – they both remark that more women have been passing through the doors of Tate’s these days, perhaps lured by the enormous selection of anime and manga or cool, underground items such as Ugly dolls. Three quarters of his employees, Ottati points out, are women.

Certainly, high-profile movies based on comic books have given business a slight bump. Already, Tony says, he has noticed Sin City graphic novels moving briskly in anticipation of the Mickey Rourke movie opening in a couple of weeks. Tate says he expects the same will happen with the Fantastic Four, slated to hit theaters in July.

Shortly after opening the current store two and a half years ago, Ottati actually sold a copy of Fantastic Four #1, which fetched more than $20,000. “It took probably 10 years for us to get expensive comic books,” he comments, sifting through a short stack of drool-worthy vintage comics in protective plastic sleeves: Hulk #2, Spider-Man #40, the first Iron Man. “We’d just be at the end of the phone book, and [collectors looking to sell] would start at A.”

After 12 years, Tate’s has indeed become the premier comic book outlet in South Florida. Customers travel up from Key West, down from Boca Raton, over from the west coast and have even stopped in from as far away as Sweden. However, Ottati realizes he couldn’t have built his empire on comic books alone.

“It kind of evolved so that people come into the store and buy things other than comic books,” he says. “Because a comic book store that just sells comic books and comic-book-related items would have a really tough time opening and surviving now.’ 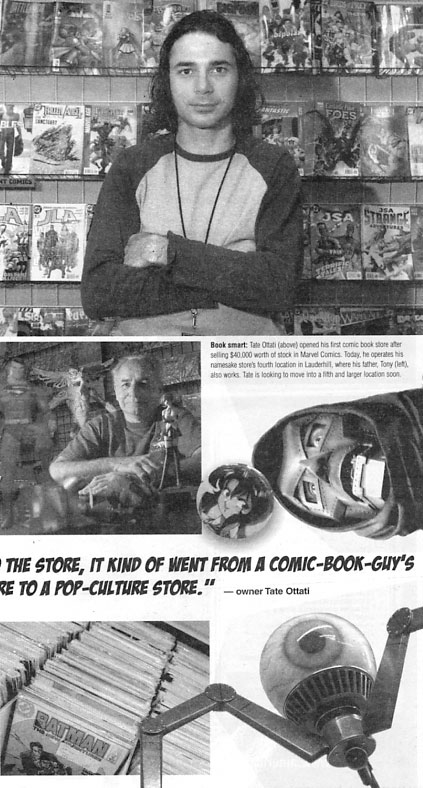