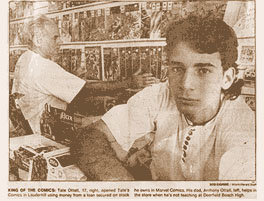 When 17-year-old Tate Ottati decided to open up his own comic book store, he financed it with money he had invested two years ago in shares of Marvel Comics, the nations leading comic book publisher. Thanks to Marvel’s success, Ottati was able to take out a loan on the stock without selling any of the shares, and Tate’s Comics in Lauderhill was born.

“Since I collected comics, I wanted to invest in the stock,” Ottati said. “It seemed like a good investment.” Like many collectors, his interest in comics began as a youngster who only cared about the books’ entertainment value. By the time he reached his teens, Ottati had accumulated thousands of comic books, and he began selling parts of his collection at local comic conventions.

After a few years of going to the shows, Ottati began buying huge sets of comic books from collectors and new ones directly from distributors to sell at conventions. When he had too many comic books to cart to the shows he said he decided it was time to launch his own shop.

Ottati’s father, Anthony, helps run the store. An Industrial Arts teacher at Deerfield Beach High School, the elder Ottati had reservations about a teenager running his own business. Four months later, he said he’s proud that his son’s first venture is succeeding.

“You can see the people coming in, that we’re building up a trade,” he said, gesturing to customers. “And it’s a fun business. It brings back childhood memories.”

Tate Ottati said his favorite customers are those who read and enjoy the books and don’t just buy them for their potential financial value.

“There’s a lot of people who don’t read their comics, who buy 10 to 15 copies of a book and just bag them and put them in boxes,” he said. “I like people who can talk about the book. It’s kind of boring if they come in and I say ‘Oh, that’s got a good story or good art’, and they say ‘I don’t care about the story.’ They don’t know what they are collecting.”

Tate’s Comics isn’t just about the Uncanny X-Men, Batman and Superman. In addition to the thousands of comic books that line the shops walls and fill dozens of boxes in the center of the store. Tate’s is home to what he says is the largest collection of Star Wars memorabilia in South Florida. All the three-inch-high plastic figures are here, as well as the model X-wing fighters, Imperial TIE fighters and land speeders.

Tate has hired someone to watch the store when he’s in class and his father is teaching. But school won’t keep him away from his shop.

Update Note: Tate sold all his Marvel stock at a great price. Shortly after selling the stock, the value of Marvel’s shares plummeted and are no longer available. That little window was a great benefit to the store!