Best Comic
Book Store
When Tate Ottati opened his comic book store, he wanted it to be an alternative to the cutthroat, high-priced comic book retailers in town. The then-17-year-old high-schooler used money he’d invested in Marvel stock to buy the place. Now, almost 15 years later, Tate’s has become the one-stop shop for a person’s comic book needs, already winning the honor of best comic book store twice. But it doesn’t sell just comic books — there are toys, videos, and all kinds of collectibles. This year, Tate’s expanded its already mammoth shop by adding another 2,800 square feet of space devoted to an assortment of vinyl toys, Greek statues, giant metal skulls, novelty books, and graphic novels. Tate’s new Bear and Bird gallery, which made headlines when it opened in February, showcases alt-art with themes like customizable Munny dolls and pop prints by artists like Skot Olsen and Terribly Odd. Rounding out the one-stop-shopping experience is Tate’s Gaming Satellite store a couple of doors down, which offers all kinds of gaming equipment, tournaments, and snacks.

Bear and Bird
Inside the Lauderhill staple Tate’s Comics, girls jog up a sturdy wooden stairway to a living-room-sized wooden loft where a metal sign on the wallpapered perimeter reads: “Bear and Bird.” The space radiates vibes of being part boutique, part girly clubhouse. Toward the front, sterling-silver necklaces dangle in two vintage armoires. In another corner, plush jester-colored couches form a nook in which to relax and gossip. Bear and Bird’s owner, Amanda Magnetta-Ottati, is sweeping the floor with a Scottie dog broom, and hundreds of its little bristle feet shimmy across the ground. Other brooms are stacked in the corner, each waiting for a new owner to take them to a good home, while metal toy robots (reissues resembling the rigid, original ’50s tin windups) angrily stare down the silk-screened T-shirts on the opposing shelf. But this boutique serves as more than a home for personality-rich trinkets and accessories. It’s also a gallery space. Amanda’s ambitious goal is to bring new alternative eye candy to the B&B each month, and that’s led to innovative shows like the popular “For Love of Munny.” In it, local and national artists customized hundreds of Munny dolls into both the adorable and the gruesome. Other scheduled exhibits include May’s “Sideshow Show,” August’s “Sex and Science,” and September’s “What a Fun Guy: The Mushroom Show.” The combination of art and merchandise, seclusion and accessibility, and all-around good taste makes this little boutique a peaceful hideaway. So let the boys play with monster magazines downstairs; you’ve got some shopping to do. 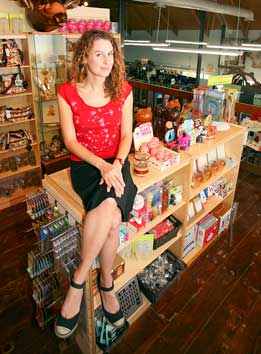 Amanda Magnetta-Ottati
For years, Amanda Magnetta-Ottati helped her husband Tate run Tate’s Comics, but it wasn’t until the couple decided to expand the popular comic book store this year that she quit her steady gig in advertising. Magnetta-Ottati now runs an eclectic hideaway, Bear and Bird, in the store’s loft space. Call it an alternative art gallery. “Something that’s been sorely lacking in Broward County,” she says, “is a space for emerging artists that are focused in pop culture.” Her space is a kind of “curated boutique,” she says, staying intentionally vague about the edgy work she prefers. “Basically, it’s all filled with stuff that I think is neat.” The Bear and Bird’s first art show “For the Love of Munny” – a collection of peculiarly compelling art toys with personalized designs — drew a crowd of 1500.

New Times: What kind of spy gadgets could I buy at the Bear and Bird? Magnetta-Ottati: Ooh! We have these cool cameras called Lomos. One of the styles takes sequential shots that capture pictures at fractions of a second’s difference. That’s a great spy tool.

What exotic destination would you like to travel to? Japan! I’ve always wanted to go. Just because I know that my head will explode from all the cool stuff. I think that I’m drawn to it in part by the awesome pull of their shopping and bizarre characters and signage! I know my husband Tate would really enjoy seeing a sumo match and eating uni!

How would you prepare for the Bond experience? I’d love a super-fabulous bag of spy disguises. It would be interesting to blend in to any situation and learn as an insider. I can’t wait to try out my bald cap and beard disguise. I actually have a dynamic duo of attack dogs. Both are adorable, scruffy mutts from the Humane Society. They are always there to remind me to take time out of my all too busy life for a good belly scratching!