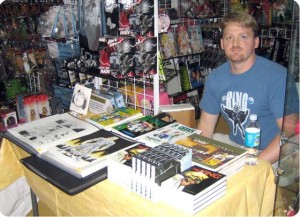 Rich Koslowski has worked in the animation and comic book field since 1990. He got his start at Archie Comics as an Inker and has since evolved into a freakin’ genius!  “It’s true,” Koslowski was quoted to say, “I’m an incredibly intelligent and talented human being. Strong, too. “His proudest accomplishments thus far in his short but illustrious career include the three Eisner nominations he received for his work on his self-published parody title THE 3 GEEKS (which later became GEEKSVILLE), his first graphic novel with Top Shelf Productions, THREE FINGERS, which earned him an Ignatz Award and throngs of beautiful groupies (mostly female), and his latest graphic novel (also published by Top Shelf) entitled THE KING! He’s currently working on an illustrated novella tentatively entitled THE LIST and taking a newly found interest in the personal grooming of his body hair (which is, in fact, unusual since he’s not all that hairy). Rich lives in Wisconsin with his wife Sandy (who helps on all his projects) and their lovely little girl, Stella. “We hate the weather here, sure…it absolutely sucks,” said Koslowski, “but, y’know, we’d feel terribly guilty moving away what with both sets of grandparents still…y’know…alive. We’re just kind of…y’know…uh…waiting.”