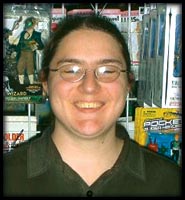 What will you spend your $25 on? I could just try to defray the costs of my monthly or weekly spending. But there’s always something new…Let’s see, what don’t I have yet?

How long have you been visiting TATE’S?
Since I moved to Hollywood…uh, 3 years maybe.

How do you make a living?
I’m a consultant for a Ft. Lauderdale software company. Translation: I fly everywhere and play with computers and help other people figure out how to use our products. And I get paid because I supposedly know what I’m doing.

If you could do ANYTHING, how would you make a living?
a) Video Game Programmer (why not?)
b) Writer: Poetry. Books. Short Stories. Comic Books. (Yeah, yeah – me and everybody else)
c) Neil Gaiman – wait, that one’s taken.

Do you have any pets? What kind & what are their names?
If I did I’d have little pet skeletons populating my apartment when I come home from those trips everywhere. At home (in Texas) I have the standard dogs, cats, and horses. The mosquitoes are big enough that you could name them, but we mostly like to watch them get ZZZKT-ed by the bug zapper. The current dog is a little grey Heinz-57 schnauser-esque type dog, who (before we started grooming) looked like a wookie the size of an ewok.

Do you have any tattoos? What are they of?
None

What was you favorite toy as a child? — Now?
From childhood: My teddy bear, Boofur. The closest I ever came to playing with dolls. Books were my favorite thing and climbing trees. But when I wasn’t reading, I played with GI Joe, Transformers, the Coleco-Vision, and my stick collection. Yes, I said stick collection – how else do you slay dragons without an armory of swords to choose from? I was 10!
Now: My teddy bear, Boofur. Books. The laptop. The Internet. Those little wind-up robots I bought from Tate’s. ::cough:: shameless plug ::cough::

What is your most bizarre childhood memory?
How pathetic. I can’t seem to think of any moments that are even worthy of a New Twilight Zone episode…
Ahem. Next question.

What is the one thing that irritates you the most?
Keanu Reeves as John Constantine (what were they thinking?!)

What is your favorite smell?
Barn smells (hay, saddles, horses)

What do you collect? Comics. And I apparently, now have a few pieces of comic art. Books: First Editions of Ted Hughes. A few nice John Gardner books as well. I have this unfailing knack for liking things that are out-of-print… gives me something to hunt for; of course it usually costs more that way.

What are some of your hobbies?
You mean, the comics aren’t enough? Mostly readin’, writin’, and ‘rith – er, horse back riding.

Favorite Cartoon? Samurai Jack. Though Teen Titans is really starting to grow on me.

What is your favorite Bumper Sticker?
There is no such thing as a good bumper sticker.

What is your dream car?
My first car was an ’86 Dodge Charger, with a Shelby Turbo engine, standard. Such fun, when it worked. Though my Dad has convinced me of the virtues of the GTO Judge.

What superpowers do you wish you possessed?
That would be telling…

If you could banish anyone into the sun, who would it be?
Whoever decided it was a good idea to cancel Farscape.

What Character on The Simpsons do you identify most with?
Maggie – except I talk considerably more. And I don’t fall down when I’m walking (much). Okay, I admit it, Lisa. Right down to being the geek at school that knows everything and whom no one understands. But everyone has said “Lisa”. Which is ironic, because Lisa doesn’t read comic books…and I don’t play the saxophone…

Do you have a homepage?
Just a blog… created for my own personal amusement and to (hopefully) amuse a few friends, not really fit for public perusal just because of its lack of interesting content.

Bonus: Favorite joke about your name:
Q: What’s a pirate’s favorite letter?
A: RRRRRRR (sounds like ARRRGGH!)
See, I have lots of R’s in my name….er, I guess you have to be there for that.