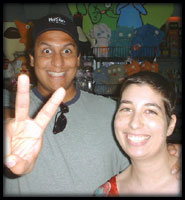 What will you spend your $25 on? Anime Rentals and maybe some Pocky!! Yummy!

How long have you been visiting TATE’S?
Around Eight Years

How do you make a living?
Jay: Work. April: I’m starting my own petsitting business.

Do you have any pets? What are their names?
We have one dog. A cute shih-tzu named Arthur. We have 4 cats. A tabby named, Flufee and a tripod tabby named Kiki. Also an American Shorthair, all white, named, P.J. and a Siamese named Buddy. We also have two ferrets, sables. They are named Kiki (the female) and Meiko (the male). Last but not least, Chubs, a male mud turtle I (April) have had for around 15 years.

Do you have any tattoos? Jay: No. April: Yes, I have 3 (so far). One on my right back shoulder is of a Chinese Lion that represents my dog (Shih-tzu means Lion-Dog) with cherry petals flowing around it to represent my name (cherry trees blossom in April in the Orient). My other ones are 2 of my cats. One is of a Siamese and the other is of my white cat sitting on a cloud with angel wings.

What was you favorite toy as a child? — Now?
Jay: Godzilla, Now… Video Games.
April: My Cookiemonster Puppet… Now, My X-Box.

What is your most bizarre childhood memory?
Jay: Seeing a condor fly overhead (and dancing with the devil in the pale moonlight)
April: The mayor of my childhood town was dressed up as the Easter Bunny. I went up to her and informed her she was not the Easter Bunny. I got in the newspaper for that!

What is the one thing that irritates you the most?
Jay: Unkind people. April: People with no common sense.

What is your favorite smell? Jay: Chicken Curry. April: The smell of the holidays, Pumpkin Pie, etc.

What do you collect?
Jay: JapAnime Videos. April: Videos and Books.

What are some of your hobbies?
Video Games, Anime and Reading

What superpowers do you wish you possessed?
Jay: Green Lantern’s powers. April: To fly & change the weather.

If you could banish anyone into the sun, who would it be?
Jay: All mosquitoes! April: Donald Trump, he’s the Antichrist!

What Character on The Simpsons do you identify most with?
Jay: Bart, April: Lisa 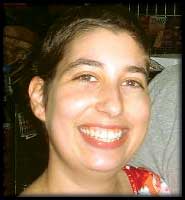 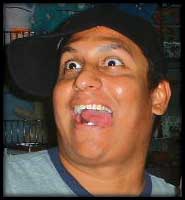