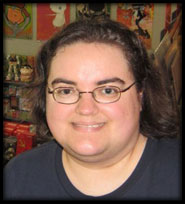 What will you spend your $25 on? Not sure yet, probably something I’ve always passed by and said, “Aw, that’d be cool, but I’m not gonna spend X dollars on that…” Basically something that has no practical use except being awesome. I was eyeing that green Haro replica the other day…

How long have you been visiting TATE’S? I’d have to say probably 1998 or so when I first started getting into anime. I was looking for a local store that sold anything beyond the Americanized stuff they had at regular toy stores, searched the phone book (yes, this was before the Internet was really the hot thing), and found Tate’s!

How old are you? I’ll be a quarter of a century this June.

How do you make a living? I write web content and maintain social media campaigns for small business websites. Right now we mostly work with lawyers, so it’s a lot of blogs and articles on legal matters. I’m not a lawyer, but I play one online. My degrees are actually in Interactive Entertainment, this is an interim career.

If you could do ANYTHING, how would you make a living? Open a dual store…half cafe/bakery, half Tate’s-esque retail shop. Don’t worry, it’d be in Orlando, there’s no way I could compete with Tate’s.

Do you have any pets? I recently lost my cat of 16 years, Buddy, but I also recently got a beta fish for my office. We had a naming contest on our blog and the readers picked Rocky Balbeta…so Rocky it is. He lives in a USB Fishquarium from ThinkGeek.

Do you have any tattoos? Nope, too indecisive for something that permanent.

What was you favorite toy as a child? — Now? Whatever video game console was current at the time. Now, probably my iPhone.

What is your most bizarre childhood memory? When I was about 3 or 4 in preschool, our center was down the block from a gay nightclub. They used to walk our group over there once or twice a month and the owners would give us juice and cookies as they were setting up the tables for the night. Looking back at it now, I realize why the whole place was dark, had a lot of pretty lights and all the workers were built guys in tight or no shirts.

What is the one thing that irritates you the most? People who can’t make a decision when it’s their obvious choice…like when you tell you friend it’s his birthday and he can go anywhere he wants, and the reply is “Oh, I’ll go wherever you guys want…”

What is your favorite smell? Lavender, or my Aunt Diane’s old house in Wisconsin

What do you collect? A lot of things. I’ve got over 700 Beanie Babies, the complete original set of Teenage Mutant Ninja Turtles action figures, a huge binder of Pokemon Trading Cards. I also collect video games and systems, vintage video game memorabilia, cat things, sushi stuff. I’d say the oddest thing I collect is name tags from employees of other businesses.

What are some of your hobbies? Collecting, obviously. I cook and bake a lot. I used to do a lot of prop and costume crafting when I was more into the anime con scene.

What is your Favorite Comic/Manga? Fullmetal Alchemist’s manga topped my list once I finished it. Comic, I’d have to say it’s a tie between Witchblade and The Darkness.

What is your Favorite Anime/Cartoon? Magic Knight Rayearth will always have a place in my heart because it was the first series I ever bought on VHS subbed. But my favorite anime overall, probably Cowboy Bebop, not only for the well done dub, but also the overall story and characters were just so awesome. Although Fullmetal Alchemist again is a close second, mainly for the story.

What is your Most Favorite Movie? Forrest Gump..

What is your Favorite Bumper Sticker? I had an awesome vinyl decal of Zechs from Gundam Wing on my beat up old minivan. Then I got a decent job and a decent car, but lost all my stickers 🙁

What is your Favorite T-Shirt? I have a shirt with Homsar on it from Homestar Runner. They don’t make them anymore, so I only wear it on special nerd occasions since it’s fading and fraying.

What is your Dream Car? A vintage VW bus…yellow with huge neon daisies and peace signs all over it. Shag carpet the entire interior, beaded curtains, the works.

What superpowers do you wish you possessed? Teleportation I’m always visiting my friends in Jensen Beach and Orlando, and I hate making that drive. My family is scattered around the country, too, so I’d love to be able to instantly visit them all when I want to.

If you could banish anyone into the sun, who would it be? I’m not edgy enough to hate anyone, really. As long as you don’t outright hurt me or mine, I don’t think I can hate someone that much.

Which character on The Simpsons do you identify most with? I’d say Marge, because I’m always trying to hold down the fort when everyone else is doing stupid things, and I’ve been known to snap when things get too insane. I also have high ideals for events, and then try to hide my frustration when things don’t go as planned.

Most treasured possession? My grandfather’s army ID bracelet from WW2, I love old war memorabilia and it’s even cooler that it was from my family. The nerdy answer to this is my custom painted Zechs Merquise resin statue.

Do you have a homepage?  I used to, but I never kept up with a website long enough to really DO anything with it.