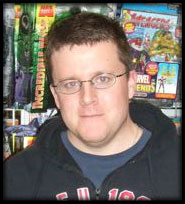 What will you spend your $25 on? Probably the first installments of a new manga series or maybe to catch-up on some back issues from the late 90s (I quit comics for a few years around then and am now slowly catching up. They aren’t as bad as my memories of what that creative nadir in comics history was like…)

How long have you been visiting TATE’S? Since I moved to Fort Lauderdale in September 2009.

How old are you? Old enough to have collected Star Comics (Top Dog was my favourite) when I was a kid.

How do you make a living? I’m a PhD student, university instructor and writer.

If you could do ANYTHING, how would you make a living? Writing fiction, plays, films and, of course, comic books. Any artists looking to hook-up with a writer? I’ve got some great concepts 🙂

Do you have any pets? Virginia, my cat.

Do you have any tattoos? No tattoos yet.

What was you favorite toy as a child? — Now? Masters of the Universe. I still have them all (even the Eternia playset).

What is your most bizarre childhood memory? I grew up in Ottawa, Canada. Everything was bizarre.

What is the one thing that irritates you the most? Fox News.

What is your favorite smell? Sunscreen, pools, the beach – summer smells.

What do you collect? Not as much stuff as I used to. Comics, books, art from places I visit.

What are some of your hobbies? Collecting comics, renting obscure movies on netflix, video games.

What is your Favorite Comic/Manga? Amazing Spiderman. Didn’t expect to like it after the reboot, but it is so good that I can’t stand the skip week each month. They should make it 4X a week!

What is your Favorite Anime/Cartoon? Full Metal Alchemist – the first series.

What is your Most Favorite Movie? A French Canadian movie called “The Barbarian Invasions”

What is your Favorite Bumper Sticker? I spent a few months in Portland, OR where everybody has a million bumper stickers. I was overloaded and am not a fan of them anymore.

What is your Favorite T-Shirt? I have a T-shirt with an old Quebec separatist referendum ‘Qui’ slogan on it. It’s an obscure political reference, especially in the United States, but I love it.

What is your Dream Car? A flying car.

What superpowers do you wish you possessed? Telepathy and flying.

If you could banish anyone into the sun, who would it be? Glenn Beck. He’s ignorant AND creepy.

Which character on The Simpsons do you identify most with?
I’m a South Park person. I can identify with Kyle.

Most treasured possession? It’s a secret.

Do you have a homepage?  Nope. But, I sometimes write for The Huffington Post, so you can find me there.