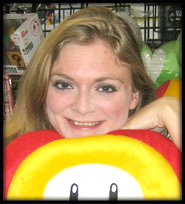 What will you spend your $25 on? Gifts for my friends!

How long have you been visiting TATE’S? Since 1995

How do you make a living? Ringling trained circus clown.

If you could do ANYTHING, how would you make a living? Doing voice acting for the next great animated series, perhaps a new Simpsons.

Do you have any pets? My roommate’s ninja dalmation. Full name, Rally the Ninja Dalmation.

Do you have any tattoos? No, just an ugly birthmark, but if I ever did get a tattoo I would want something truly meaningful like a dolphin diving into my ass crack.

What was you favorite toy as a child? — Now? My favorite toys were My Little Ponies and Ninja Turtles. The turtles usually slave traded the ponies to the Barbie mansion. Those Barbies were cruel masters who beat the ponies on a regular basis. (Not kidding.) I still play with the ponies, only now it’s payback time! Oh yeah, Wii is awesome as well.

What is your most bizarre childhood memory? Lets just say I’ll never look at squirrels the same way again.

What is the one thing that irritates you the most? Vagisil commercials. The commercial is more irritating than the infection!

What is your favorite smell? The smell of success!

What do you collect? Ponies! My Little Ponies, Spider-Man Comics and everything Sailor Moon, and dalmations named Rally… I also love to steal, I mean “collect” the jellies at diners. Any flavored jelly, but grape. Grape jelly is gross.

What are some of your hobbies? Acting, CosPlay, Directing, Script Writing & taping insects to the floor. If they sneak in my house then there’s going to be consequences. Taping them to the floor won’t kill them, but it will certainly give them something to think about. I also like to dangle a piece of chocolate cake in front of them.

What is your Favorite Comic/Manga? Mad about Marvel. I love Spider-Man, it’s actually more of an obsession. I’m seeing a doctor about it. He says I’ll be okay if I get rid of my life sized stuffed Spider-Man that I read to, smell often and whisper sweet nothings to.

What is your Favorite Anime/Cartoon? Sailor Moon

What is your Most Favorite Movie? Wizard of Oz, Alice in Wonderland, Labyrinth

What is your Favorite Bumper Sticker? A “Peanuts” bumper sticker that showed a pregnant Lucy saying “God Damn you Charlie Brown!”

What is your Favorite T-Shirt? Free ones from TATE’S… Hint Hint!! 😉

What is your Dream Car? Blue VW Bug, but I’ll settle for the Batmobile.

What superpowers do you wish you possessed? I want to be the Invisible Woman, so I can sneak up on people – make sure they aren’t talking about me. I’m not paranoid!!

If you could banish anyone into the sun, who would it be? The Olsen Twins & the cast of High School Musical

Which character on The Simpsons do you identify most with? Hans Molemen (The Mole Man)

Most treasured possession? My Golden Girls DVD collectors edition… “Thank you for being a friend.”

My website: I have two pages on Animingle.com, a Smash Brothers page and a page under my name. 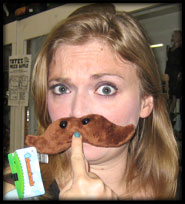 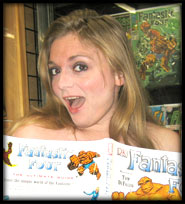