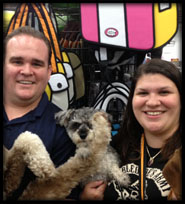 What will you spend your $25 on? Buy a Roth IRA

How do you make a living? C. Attorney A. Pastry Chef, cake baker & decorator

If you could do ANYTHING, how would you make a living? Honestly we both love what we do, he gets to argue and fight for the little guy, and I get to play with cake, its an awesome way to make a living.

Do you have any pets? 3 dogs, Ginny (labradoodle), Greycie (mini schnauzer), and Dixon (dachshund)

Do you have any tattoos? C. None yet…. A. 9, wings on my back, a Boba Fett sugar skull on my ankle, a cupcake skull and cross bones,  “I solemnly swear that I am up to no good.”, and bunches of others, and I’ll be adding Poison Ivy pin up soon!

What was you favorite toy as a child? — Now? C. My Castle Greyskull playset,  and now Transformers A. GI Joe Mobile Command center, and now Poison Ivy figures

What is your most bizarre childhood memory?

What is the one thing that irritates you the most? People who talk during movies

What is your favorite smell? C. Silver Age comic books A. Clean laundry and old books 🙂

What do you collect? We collect comics (Deadpool, Morning Glories, Wolverine,  Transformers, Batman, and X-Men), statues, and I (Angel) collect Harry Potter stuff, I’ve even got 4 full sets of the books 🙂

What are some of your hobbies?

What is your Favorite Comic/Manga? C. X-Men: Age of Apocalypse A. Morning Glories

What is your Favorite Anime/Cartoon? C: Batman the Animated Series A. The Simpsons

What is your Most Favorite Movie? C. Dark Knight  A.Harry Potter and the Prisoner of Azkaban

What is your Favorite T-Shirt? C. My old worn out Army PT shirt A. Deadpool in a bowler hat and monocle

What is your Dream Car? C. Black Tumbler A. ’56 Cadillac El Dorado

What superpowers do you wish you possessed? C. Mutant healing factor A. Super Speed

If you could banish anyone into the sun, who would it be? Michael Bay …. its TMNT not teenage alien ninja turtles….

Which character on The Simpsons do you identify most with? C. Lionel Hutz, Esq. ! A. Jessica Lovejoy

Most treasured possession? Our dogs <3

Do you have a homepage? AngelsAdventuresInCakeLand.com

Many thanks to the amazing crew at Tates! You guys are half the reason we go there so much:) 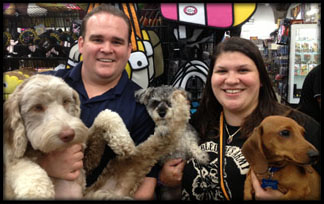