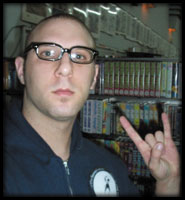 What will you spend your $25 on?
I’ve decided that the Japanese are much weirder than Americans, or at least more openly weird, so whatever I buy will be very weird and Japanese.

How long have you been visiting TATE’S?
I’m not sure… 5 or 6 years

If you could do ANYTHING, how would you make a living?
I would love to be a writer.

Do you have any pets? What kind & what are their names?
Ripley is a cat and she rules.

Do you have any tattoos? What are they of? I have quite a few, but my favorites are my Batman and Robin, Rat Fink, my Japanese chest piece and my newest baby, a Devilman tattoo on my foot.

What was you favorite toy as a child? — Now? There was a toy made in the 70’s called Suckerman. Although it sounds very perverted, it was actually just an alien guy with suction cups all over him (still sounds perverted). You threw him against the wall and he would stick. I still own one that I got on eBay and it is still my favorite ’cause its just simplistic fun. Toys today are too complicated.

What is your most bizarre childhood memory? As a child I taunted the guy at Disney who played Pluto, then he chased me around the park making me cry. I thought that was weird.

What is the one thing that irritates you the most?Everything irritates me, but I really hate when people sing out loud to their favorite songs. Even when they have good voices it bothers me.

What is your favorite smell? I really don’t think about smells that much. But, I love to smell girl’s hair.

What do you collect? I’ve collected comics for 16 years and any cool toys. I used to collect records, but I decided CDs were just more convenient.

What are some of your hobbies? I used to play in a band, but now I just collect comics and toys and read. I’m not really that much fun anymore…

Favorite Comics? I’d have to say Alan Moore’s Top Ten, when it was out, or Astro City. Both were just well written, realistic comics.

Favorite Cartoon? The old Dungeons and Dragons cartoon from the 80’s. That cartoon was amazing and it never tried to sell you anything.

Favorite Movie? Fast Times at Ridgemont High. If there was a more realistic movie about the 80’s, I don’t know what it is. Plus, it’s hilarious.

What is your dream car? I’m not a big fan of cars, except to get me from point A to point B, but if I could have any vehicle I’d like to drive a tank.

What is your favorite Bumper Sticker? Anything that starts “Honk If You’re” and ends with some nonspecific cause.

What is your favorite T-Shirt? I have a Batman shirt from 1989 when the movie came out. I don’t wear it much, but it must be my favorite since I still own it.

If you could banish anyone into the sun, who would it be?
This is an unfair question, because I could never pick just one… so let’s start with President Bush and end with Fred Durst. That should just about cover all the morons.

What Character on The Simpsons do you identify most with?
Comic Book Guy. Any self-respecting comic nerds who don’t say the same are just fooling themselves.

Most treasured possession? When my Grandfather lived with us I used to brush his hair with his silver comb. When he died, my mother gave me the comb. I was 8 or 9, so that is my most prized possession.