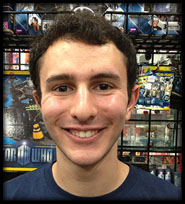 What will you spend your $25 on? Doctor Who merchandice and comics
How long have you been visiting TATE’S? 7 years
How old are you? Approximately 19.016 revolutions around the sun
How do you make a living? I am a tutor, but also a student at Hogwarts (Slytherin Class of ’17)
If you could do ANYTHING, how would you make a living? I look forward to a career in science doing research. I want to make money while also discovering amazing new things.
Do you have any pets? 4 dogs: Nilla, Black dog, Little Bite & Wolverine
Do you have any tattoos? Nope
What was your favorite toy as a child? — Now? Pokemon and Teen Titan action figures as a child. My 2 favorite toys now would be Nintendo video game systems, my Wii U and 3DS (Pokemon, Legend of Zelda and Super Smash Bros. especially.)
What is your most bizarre childhood memory? My childhood.
What is the one thing that irritates you the most? When people touch my stuff without asking.
What is your favorite smell? Amortentru – probably vanilla, the scent of the beach, or a new book.
What do you collect? Favorite sports players’ memorabilia, DVDs of my favorite movies, comics, DC, converse, Nintendo Game systems, Tate’s Sale shirts & awesome shirts.
What are some of your hobbies? Reading, going on tumbler, watching football and basketball, reading comics, watching movies, and playing Nintendo.
What is your Favorite Comic/Manga? Geoff John’s run on Green Lantern or Scott Snyder’s Batman
What is your Favorite Anime/Cartoon? Adventure Time or Teen Titans
What is your Most Favorite Movie? The Doctor VS. The Universe (Doctor Who and Scott Pilgrim Mashup)
What is your Favorite Bumper Sticker? Coexist fandom bumper sticker.
What is your Favorite T-Shirt? Can’t list all over 9,000 of them.
What is your Dream Car? The Weasley’s Flying Car
What superpowers do you wish you possessed? Telekinesis, Flight, super human intelligense, super speed and teleportation.
If you could banish anyone into the sun, who would it be? Justin Bieber
Which character on The Simpsons do you identify most with?
Most treasured possession? A helmet signed by Green Bay Packer’s quarterback, Brett Farve.
Do you have a homepage? Not yet
What are your favorite websites? tumbler.com, dorkly.com, crazyforcomiccon.com, quertee.com, ign.com, thetangertial.com