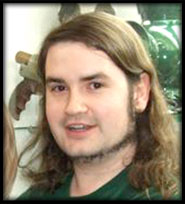 What will you spend your $25 on? Either Avengers: Kree-Skrull War or partially apply it towards either Jack Kirby’s Fourth World Omnibus or Marvel Masterworks Warlock Volume 2.

How long have you been visiting TATE’S? Around 3 years. Just a bit after we moved down from Kansas City, Missouri.

How do you make a living? Admin work and art work.

If you could do ANYTHING, how would you make a living? Only the art work. And I’d prefer comics work.

Do you have any pets? A sheltie named Echo.

Do you have any tattoos? None as of yet, but I’ve designed a few for others.

What was you favorite toy as a child? — Now? Then – my original Snake Eyes. Now – my Green Lantern Batman.

What is the one thing that irritates you the most? Intolerance melded with ignorance. Grrr!

What is your favorite smell? The salty sea air.

What do you collect? Comics, graphic novels, trades and toys (when I can!).

What are some of your hobbies? Drawing, painting, writing and reading books on physics and evolution to my three year old son.

What is your Favorite Anime/Cartoon? Batman: The Animated Series

What is your Most Favorite Movie? Jaws

What is your Favorite T-Shirt? My Red Lantern shirt.

What is your Dream Car? The Batmobile. Especially the current flying model.

What superpowers do you wish you possessed? I’ve always wanted a healthy mix of Superman’s invulnerability, Batman’s keen detection and fighting skills and a power ring. I’m pretty indifferent to which color of ring, too. I just want one!

If you could banish anyone into the sun, who would it be?
Too much power! But I’d say anyone who is intolerant deserves a trip to the sun.

Which character on The Simpsons do you identify most with?
Homer!

Do you have a homepage?  rockisdeaddclxvi.deviantart.com 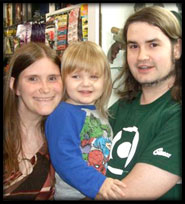