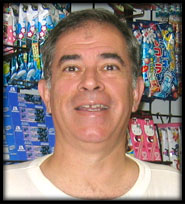 The ‘G’ stands for Gary, which was what my late mother wanted to name me, but Dad always had his way, so I became Jed. Whenever I print the full name, I use the middle initial, but when I use a signature, I always include the middle name.

What will you spend your $25 on? Most likely, I’ll use the money to buy the comics I’d subscribed from the store, but I might also purchase a graphic novel or other reading material I’d been holding off on buying for some time.

How long have you been visiting TATE’S? To the best of my recollections, I began visiting TATE’S in the late 1990s, when the store was in its previous University Drive location (one block north from where it is now).

How old are you? I’m not ashamed to admit my current age… I’m 52 (going on 53 in March), and I still enjoy reading comic books. Anyway who thinks, “…he must be going through his ‘second childhood’…” should realize I haven’t left my first one yet!

How do you make a living? Presently, I’m a ‘toll collector’ off of the Sawgrass Expressway (in the Sunrise area), but my other vocations (since my first visit to TATE’S) have included ‘shipping clerk’, ‘file clerk’, ‘auto parts delivery person’, and even a ‘supermarket bag boy’ – the only job I know in which a guy like me could be in his 40s, and still be call a ‘boy’!

If you could do ANYTHING, how would you make a living? Given some of my rare talents, I would love to be a professional cartoonist – though not necessarily for comic books or graphic novels. I’d prefer doing a daily syndicated comic strip or a webcomic, or work for an animation studio (as an ‘in-betweener’). I was thoroughly inspired to go in that direction, when I was a ‘volunteer worker’ for three months in 1995 at the (then-“under construction”) International Museum of Cartoon Art in Boca Raton (which had since closed down, and will reopen in 2007 in the Emprie State Building in NYC).

Do you have any pets? Alas, the last pet I’d owned was a white parakeet named ‘Blueberry’, who passed away in February, 1994 – one month after I’d travelled down (from Reading, PA) to Margate, FL. Since moving into my own place (in April of that year), I was unable to own another animal, as the condo complex rules prohibited the owning of pets (a rule that really sucks!).

Do you have any tattoos? I do not possess tattoos (or, for that matter, body piercings) of any kind. I’m a firm believer that my body – like the comics in my huge collection – should remain in pristine condition!

What was you favorite toy as a child? — Now? Going back to the early 1960s – when I was living (for two years) in Ozone Park, NY – my favorite toy was a battery-powered miniature replica of a mechanical arcade “claw machine” by Remco. (At least, I had a better chance of picking up prizes with that machine, than with the coin-operated mechanical rip-off artists of today!) My current favorite toy, oddly enough, is an outdated video game system from the 1980s; the Atari 2600 VCS. I still own it (and a plethora of software, including several games in the ‘Supercharger’ series which added more ROM power via the downloading of game tapes through a cassette player), and it’s doubtful that I’ll be acquiring a state-of-the-art video game system (like PS3 or Wii) anytime soon.

What is your most bizarre childhood memory?
Several come to mind; but the only one I can discuss in general public involves an incident at summer camp, back in 1968, when I was 14 years old. I was at Camp Ramapo-Anchorage in the Kingston-Rhinebeck area of NY, having to share a bunkhouse with the ‘camp bully’. I won’t go into the details of what he put me through all during that summer, but the ‘high point’ (or, should I say, the ‘low point’) came the day we went on a hike through the woods. During said hike, the bully was casually tossing lit matches into the brush – eventually starting a fire that the rest of us campers had to put out by stomping on the grass! (I’d ruined my sneakers – which had melted in the process.) I so-o-o-o-o wanted to snitch on his parents on “Visitor’s Day”, but the camp counselors kept me from doing so. To this day, I’m still wondering whatever became of that ‘camp bully’? With his ‘talents’, he probably ended up being a bold criminal… or a politician… or (with my luck) both!

What is the one thing that irritates you the most? Latex balloons. I don’t like that ‘squeaky’ noise when one rubs a fully-inflated balloon (or when someone tries to make ‘balloon animals’), nor that loud ‘bang’ when one pops! And now, I’m inclined to agree with environmentalists that they are a threat to the ecosystem (when a helium-filled latex balloon pops over the open ocean, and are ingested by any curious sea creatures). Better that balloons be made out of mylar, and use the latex for something more practical, like gloves!

What is your favorite smell?
Once again, I’m going back to the early 1960s in Ozone Park, NY for the answer. There was a bakery, five blocks away from home, where one can still smell freshly baked bread in the early morning hours. Anyone can recall a favorite perfume (or cologne) scent, but my remembrance of this aroma (from such a great distance) still stands the test of time!

What do you collect? In addition to my huge comic book collection, I also have an assortment of animation art (cels, storyboard images, model sheets, etc.), drawings by a variety of cartoonists and anthroartists (too numerous to list), rubber stamps (which I use to adorn my stationery – especially around Christmas time), comedy recordings of all types (on vinyl, audiotapes, CDs, VHS tapes, and DVD), British humor books (e.g. “Monty Python”, ‘The Goon Show”, etc.), and puzzle books (including every issue of GAMES Magazine since it began in the late 1970s).

What are some of your hobbies? Well, I like to draw ‘funny animal’ (or ‘anthropomorphic’) characters, and I’d been a contributor to the long-running ‘funny animal’ APAzine “Rowrbrazzle” (since the late 1980s), as well as a few other ‘zines that cater to those who are interested in such art. In addition, I also like to make word puzzles (e.g. anagrams, cryptograms, sudokus that use letters instead of numbers, and so on). In fact, 2007 will mark my 25th anniversary with the National Puzzlers’ League – a not-for-profit group, whose members include Will Shortz (the crossword puzzle editor of The new York Times) and Mike Reiss (executive producer of “The Simpsons”)!

What is your Favorite Comic/Manga? As far as manga is concerned, anything by Osamu Tezuka. As for any domestic comic book, I would have to say “Critters” (from Fantagraphic Books), the best anthropomorphic anthology series from the 1980s (which included Stan Sakai’s “Usagi Yojimbo”, Mike Kazaleh’s “Captain Jack” and J.P. Morgan’s “Fission Chicken”).

What is your Favorite Anime/Cartoon? My favorite anime is “Tanuki Pon Poko” (from the same studio that produced “Spirited Away” and Princess Mononoke”). And my favorite American animated film is a dead heat between the classic Disney cel-animated work “The Lion King” and Chris Wedge’s CGI comedy “Ice Age”.

What is your Most Favorite Movie? It wouldn’t be fair if I chose a drama over a comedy (or vice versa), so here’s a mini-list of my cinematic faves:
FAVORITE DRAMA: (Tie) “Casablanca” and “Citizen Kane”
FAVORITE COMEDY: (Tie) “Annie Hall” and “Forrest Gump”
FAVORITE MUSICAL; “Singin’ in the Rain”
FAVORITE DOCUMENTARY: “Fahrenheit 9-11”

What is your Most Favorite Bumper Sticker?
My “Pat Paulsen for President” bumper sticker (which I’d acquired back in 1968, when he really was running for office). And I still have it to this very day (and have not adhered it to any sort of vehicle).

What is Your Favorite T-Shirt? I could’ve easily selected one of my comic-related T-shirts (of characters like Erma Felna from “Albedo”, Usagi Yojimbo, Omaha the Cat Dancer, et al); but instead, my favorite T-shirt is one that my late mother picked up for me many years ago, during a trip to Egypt. It depicts three anthropomorphic camels – one who’s Jewish, one who’s Arabian, and one who’s American – all playing musical instruments, with the (timely) message reading “Hard Rock Peace in the Middle East”.

Correction: When I’d mentioned the “Hard Rock Peace” shirt (with the three camels upon it), I’d stated that Mom acquired it in Egypt, which was the wrong location. (True, Mom did travel to Egypt, but didn’t buy the T-Shirt there.) She, in fact, bought the garment in Israel (during another overseas trip she’d taken); a label inside of it specifically states that fact.

What is your dream car? While most folks prefer a luxury car (like a Cadillac or a Rolls-Royce) or an action-packed set of wheels (such as a Mustang or an Aston Martin), my ‘dream car’ sounded like one that was made for geeks, but I like it (for what it’s worth). When I went to C.W. Post College in Greenvale, NY (Circa the early 1970s), I saw this car in the campus parking lot, and I wanted to have one of my own… a ‘limited edition’ AMC Gremlin with a Levi denim interior! (Wishful thinking, I know, but what the hell!)

What superpowers do you wish you possessed? I wish I could fly like Superman; this way, I can travel to places on Earth I have yet to visit, and (more importantly) I can avoid those long lines (and security checks) at the airport!

If you could banish anyone into the sun, who would it be? At the present time, it’s a close race between Osama Bin Laden and the manager of the toll plaza I work at! (And remember, “BOSS spelled backwards is Double-S-O-B!”)

Which character on The Simpsons do you identify most with?Although I want to identify with ‘Bart’ (having got away with some mischief in the past), I’m more apt to be more like ‘Homer’ (a perennial loser in the present).

Most treasured possession? That could run the gamut from anything in my vast collection(s). But, to save time (and space), I will openly admit that my favorite belonging (for now) is a hardcovered copy of “Of Mice and Magic”, with autographs from various folks in the animation field (e.g.Chuck Jones, Friz Freleng, and [most recently] two former Famous Studios employees who’d passed away in 2006: veteran animator Myron Waldman and voice actor Sid Raymond – who I’d met in Fort Lauderdale in April, 2005). And, of course, it was also autographed by its author, film critic Leonard Maltin.

Do you have a homepage?
At this time, I do not have a homepage of my own. However, I do have several galleries of my ‘funny animal’ art (under my nom de plume ‘Rob Cat’) in some websites, such as “The Round House”http://roundhouse.wulfnet.net/gallery/v/RobCat/ and “Furry Inflation Pages” http://cerine.macrophile.com/art/robcat/

List your favorite websites: Among my all-time favorite websites are “Belfry Webcomics” (a home to hundreds of anthropomorphic comic titles)http://www.belfry.com/comics/ , “Cartoon Research” (with the latest news on animation from my good friend Jerry Beck)http://www.cartoonresearch.com/ and National Public Radio (with lots of stuff to listen to, on shows like “All Things Considered”, “Morning Edition”, “Weekend Edition”, and radio’s only game shows “Wait! Wait! Don’t Tell Me!” and “Says You!”) http://www.npr.org/ 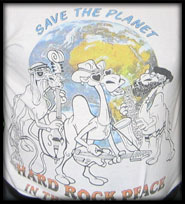