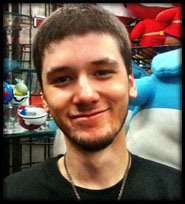 What will you spend your $25 on? Kidrobot Vinyl Toys

How long have you been visiting TATE’S? 6-7 years

How do you make a living? Student

If you could do ANYTHING, how would you make a living? Baseball Pro

Do you have any pets? Two, A cat named Spunky and a dog named Sharpie

Do you have any tattoos? One on my left arm, it’s the symbol for Scorpio

What was you favorite toy as a child? — Now? A little plushie cat named Sasha (then) and now would be all my Dragonball Z toys

What is your most bizarre childhood memory? When I met a friend of mine when I was three. I was in the baby seat in the shopping cart at Publix eating a cookie, when his mom stopped the cart next to me with him in the front. He took my cookie and I cried. I then smacked him and took it back. He cried too and our moms put us out of the carts and I played tag with him…. We’ve been friends for 16 years.

What is the one thing that irritates you the most? Stupidity

What is your favorite smell? Febreeze for sure. I like it to much.

What do you collect? Mainly just anything Star Wars

What are some of your hobbies? Video games, soccer, and baseball.

What is your Favorite Comic/Manga? Comic: Spiderman – Manga: Bleach

What is your Favorite Anime/Cartoon? Anime: Clannad – Cartoon: Adventure Time

What is your Most Favorite Movie? The Fifth Element

What is your Favorite Bumper Sticker? The one that makes fun of “My kids an honor student”, it says “Your kids not smart so stop announcing it”

What is your Favorite T-Shirt? My awesome blank white t-shirt.

What is your Dream Car? A 2004 Chevy Corvette. Best model in my opinion.

What superpowers do you wish you possessed? Teleportation and Invisibility. No more driving with idiots and I can be invisible! That’s just amazing.

If you could banish anyone into the sun, who would it be? Vince Vaughn, Kanye West, Lebron James, and Jonah Hill. They just suck.

Which character on The Simpsons do you identify most with? Don’t know anything about the Simpsons but Futurama I’d be the professor. Plus I want his glasses.

Most treasured possession? A little golden hammer my grandfather gave me when I was a kid.

Do you have a homepage? Nope, I don’t really like computers. Plus I am stupid when I try to use them.

What are your favorite websites? Uhhhhhh….. google?