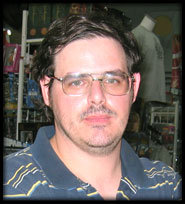 What will you spend your $25 on? On comics at TATE’S of course!

How long have you been visiting TATE’S? 10+ years (and still going like the energizer bunny)

How do you make a living? Work on resetting store merchandise on shelves.

If you could do ANYTHING, how would you make a living? No contest here – comic book writer/editor.

Do you have any pets? Yes, Little, a mixed breed poodle.

Do you have any tattoos? No tattoos.

What was you favorite toy as a child? — Now? Had – Star Wars/Transformers/G.I. Joe and I still love them today.

What is your most bizarre childhood memory?
Falling off a slide as a child and breaking my right arm while being a daredevil.

What is the one thing that irritates you the most? Small children that scream too much.

What is your favorite smell? Vanilla

What do you collect? Comics, DVDs, toys on occassion.

What are some of your hobbies? Internet chats, comic collecting, tv, video games, dating (I’m single and available)

What is your Favorite Comic/Manga? Star Wars

What is your Most Favorite Movie? Star Wars!!!!

What is your Most Favorite Bumper Sticker?
My student beat up your honor student.

What is Your Favorite T-Shirt? My snake eyes t-shirt (not the G.I. Joe character)

What is your dream car? Souped-up Chevy S-10

What superpowers do you wish you possessed? Super-speed, flight, x-ray vision.

If you could banish anyone into the sun, who would it be? No one, really.

Which character on The Simpsons do you identify most with? Tie – Otto for mellowness; Comic Book Guy for the comic book clichés.

Do you have a homepage?
Profiles – warhawk871@aol.com