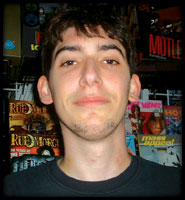 What will you spend your $25 on? Probably Preacher TPBs.

How long have you been visiting TATE’S?
Two years, but only really regularly for one.

How do you make a living? Writing.

If you could do ANYTHING, how would you make a living?
Writing. I suddenly get the impression I’m not creative nor funny enough to be customer of the month.

Do you have any pets? What are their names? Only one, her name is Junkie, and she’s the best autistic cat ever.

Do you have any tattoos? I have a tattoo reading “I LOVE TATE” across my butt. I got it in Los Angeles in 1997 after a week of heroin-induced violence and whoring. I don’t know why…

What was you favorite toy as a child? — Now?
As a child? Probably my Duck Hunt gun, which for some reason I’d severed from my Nintendo and often brought to school and pointed at people menacingly. Now? My favorite toys are probably social standards.

What is your most bizarre childhood memory?
When I was seven (1992), we had a three story house with a long spiral staircase going from the attic (technically the fourth story) to the basement. I was up in the attic playing with my Gigan and Anguirus toys and I accidently dropped Anguirus by the edge of the stairs. Being a hyperactive and thoughtless child, I overstepped greatly while going to get him, and ended up with one leg out in the air. I remember trying to turn around and go back, but the whole gravity thing wouldn’t give me a second chance and I went crashing down the first flight of stairs, rolled across the landing (still clutching Gigan), bounced down the next flight of stairs, past my mom (who was on the portable phone) and skidded to a halt on the ground second floor. I got up, stumbled back, stumbled forward, and then noticed I couldn’t feel my leg. My mom came running down the stairs, and I turned towards her and went toppling down both remaining sets of stairs (maybe twenty feet) bounced off the hearth and slammed the back of my head into the wall. I landed on my back, and everything went white; okay, now here’s the bizarre part (anyone who knows me knows that first part of the story, ie: me hurting myself in a random and horrible way is pretty much day to day fare.). The ambulance comes, and my memory gets spotty here, but I remember very well one image. As they lifted me onto the stretcher, my head kind of lolled to the side a nd I saw a bloody body print where I had been laying. My dog at the time, a sweet, skittish golden retriever innovatively named “Goldie”, was lapping up the blood by the neck part, separating the head from the body. He looked up at me, and said, in a vaguely Russian accent: “It tastes so good.” Then I had a seizure. But I’m Okay now, I promise.

What is the one thing that irritates you the most?
When I hallucinate from blood loss that dogs are talking to me.

What is your favorite smell? Gasoline. And the souls of the fallen.

What do you collect? Insecurities.

What are some of your hobbies? Hobbies? I’m hardly active enough to have hobbies; I guess I do have interests, though. Movies, comics, books, writing, people… Oh wait, I do have a hobby! On Fridays, when most families move out of my apartment complex, they leave all the furniture/appliances they don’t want out by a big dumpster. I recently acquired a sledge hammer. Do the math.

What is your favorite T-Shirt? Cripes, uh… I have a shirt I desperately want made that says “I SWEAT TO GOD I’M NOT A SUPERHERO.”

What is your dream car? A pimped out police car with a cannon that shoots joy.

What superpowers do you wish you possessed?
Ever seen Star Trek, The Next Generation? Remember John De Lancie as Q? Hell yes. *(snap)*

If you could banish anyone into the sun, who would it be?
I don’t know; there are so many genuinely evil people out there, it’s hard to choose just one. I mean saying “THE PREZIDENT” would be so easy, but honestly, he’s more of a puppet that anything else… Cripes… Bill O’Reilly maybe? But, all that fat might short out the sun.

What Character on The Simpsons do you identify most with?
Screw Simpsons. Screw Kill Bill. And screw Naruto. (Gets kicked out of the store. Comes back in.) Ralph Wiggum, his antics are hilarious! HA. HA. HA.

Most treasured possession? My laptop. Either that or my sledge hammer.

Do you have a homepage? It’s only updated occasionally, and co-owned by El Dietcrack himself, my pseudo-buddy Nate. 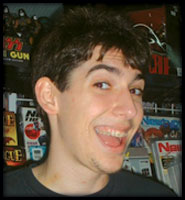 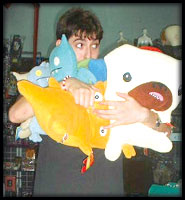 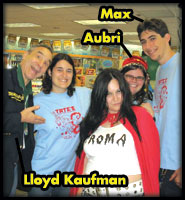