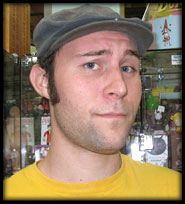 What will you spend your $25 on? Designer Toys!!

How long have you been visiting TATE’S? Since about 2002 or 2003, but I really started coming more often since like 2005 I believe.

How do you make a living? Maaakin Cooffeeeeeeee (I work at Starbucks)

If you could do ANYTHING, how would you make a living? I would be a professional animator, preferably working for Dreamworks or Blue Sky. If not that then I would want to have my own animated series.

Do you have any pets? Yes, two cats named Kitty and Jack (I hate them both).

Do you have any tattoos? Nope. My girlfriend would be happy if I did, but I have no interest.

What was you favorite toy as a child? — Now? Then: I loved toy cars and crashing them into one another with my brother.
Now: My Greg Simkins Upper Playground Walrus vinyl toy.

What is your most bizarre childhood memory? Hmmm… not sure if its the most bizarre, but its the first thing to come to mind. When I was in 5th grade we went on a school trip to Washington DC and one night I creeped myself out because I tricked myself into thinking one of the guys in my hotel room was an alien and it took me forever to fall asleep after that.

What is the one thing that irritates you the most? Hmmm… thats tough, either ignorant people or terrible drivers.

What is your favorite smell? Hot Wings! Just thinking about them make my mouth water.

What do you collect? Lots of stuff. Pez Dispensers, Monopoly Board Games, Designer Toys, Prints, Artwork and Comics

What are some of your hobbies? Drawing, Animating, Painting, Reading Comics, Playing Video Games

What is your Favorite Comic/Manga? Hmmm… either Justice because its amazing or Kyle Baker’s Plasticman because the character and artwork is so fun!

What is your Favorite Anime/Cartoon? Looney Tunes! Daffy Duck is my favorite.

What is your Most Favorite Movie? Animal House

What is your Favorite Bumper Sticker? Hmmm… I’m not sure, but I remember reading a funny shirt once that said “Save a tree wipe you ass with an owl”. That shirt was funny, if it is a bumper sticker then that would be my favorite.

What is your Favorite T-Shirt? Just this plain yellow shirt I have, it’s awesome. Its the shirt I painted myself in for the Tate’s Self Portrait show

What is your Dream Car? 1987 toyota van “toyowagon”. I had one once, but then it died 🙁 One day I will buy another one and fix it up.

What superpowers do you wish you possessed? Teleportation. I could be anywhere I felt like whenever and I would never have to drive again ever. It would be awesome!

If you could banish anyone into the sun, who would it be?
Kanye West! This has nothing to do with the MTV video music awards either. I’ve always hate him!

Which character on The Simpsons do you identify most with?
Probably Itchy, because I hate cats. Not to the extent of him though, I don’t hurt animals.

Most treasured possession? My ring my grandparents gave me when I turned 13. My dad made it and my grandpa engraved it.

Do you have a homepage?  Yeah I do its dbruck.com – you can go on there and check out my animation and artwork if you’re interested. 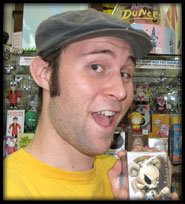