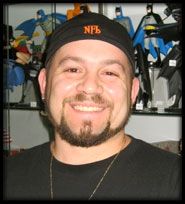 What will you spend your $25 on? Something Batman related.

How long have you been visiting TATE’S? Since at least ’98.

How do you make a living? I am a Manager at the Hard Rock Cafe.

If you could do ANYTHING, how would you make a living? I’d love to teach, but the pay in Florida is horrible.

Do you have any pets? I have a German Shepard/Lab mix named Tennessee, a Silky Terrier named Dominic and a Bearded Dragon named Angel.

What was you favorite toy as a child? — Now? I’d have to say its a tie between my G-1 Optimus Prime and Metal Lion Voltron.

What is your most bizarre childhood memory?
Seeing Spiderman climb the Macy’s building and was like WHOA!

What is the one thing that irritates you the most? New England Patriot Fans

What is your favorite smell? Citrus

What do you collect? Anything and everything Batman or Batman Family related.

What are some of your hobbies? Love Movies and live concerts. Comic and toy collecting.

What is your Favorite Comic/Manga? Batman/Superman at the moment.

What is your Favorite Anime/Cartoon? Batman The Animated Series kicked total arse!!

What is your Most Favorite Movie? Until Batman Begins came out it was the ’89 Batman, but the Holy Trilogy still reigns in my top 5.

What is your Favorite T-Shirt? My Vintage Batman T.

What superpowers do you wish you possessed? Magneto’s Powers… you can pretty much do anything if you can wield all metals.

If you could banish anyone into the sun, who would it be? ALL NEW ENGLAND PATRIOT FANS!!!! and Batman haters LOL

Which character on The Simpsons do you identify most with? Moe, its tough to be in the restaurant biz

Most treasured possession? My Daughter Kylie

Do you have a homepage? http://www.myspace.com/hrcbatman