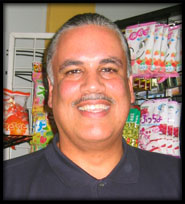 What will you spend your $25 on? The next batch of DC Direct or Toy Biz Marvel Legends action figures.

How long have you been visiting TATE’S? 4 years.

How do you make a living? I’m a Professional Medical Representative for Abbott Laboratories, Inc.

If you could do ANYTHING, how would you make a living?
Drawing, painting and creating.

Do you have any pets? The only black and white Puerto Rican mixed breed Chihuahua in Weston named Perlita. Possibly the only mixed breed dog in Weston.

Do you have any tattoos? Just the abdominal mark left by an exploding firecracker I picked up when I was to young to know what it was.

What was you favorite toy as a child? The 1966 Ideal Toy Company’s Captain Action’s sidekick Action Boy with silver space uniform. I also had the 3 teen uniforms of Superboy, Robin and Aqualad. Now? The current line of Corgi die cast Batmobiles.

What is your most bizarre childhood memory? As every child in the 60’s, I wanted to be the Adam West, Batman so I decided to make a uniform with whatever was available around the house. Although I felt pretty heroic with my creation then, I thank God no known photo exists. The uniform consisted of my white undies, my mother’s yellow dish washing rubber gloves and black Go-Go boots and topping off my mental illusion of a cape with the color bath towel of the day. Believe me, not a pretty sight.

What is the one thing that irritates you the most?
Bad Hollywood film treatments of long awaited comic book character movies.

What is your favorite smell? A weekly fresh batch of newly purchased comic books.

What do you collect? Mostly DC and Marvel action figures. Over 500 by now proudly displayed out of box, in 5 large curios around the house.

What is your favorite Comic? Currently, the DC Crisis story line. Mostly anything from DC first and Marvel second.

What is your favorite cartoon? The current Cartoon Network, Justice League Unlimited – whenever I’m able to catch it on TV. The use of so many obscure DC characters is a fan’s dream come true.

What is your most favorite movie? The Matrix series of movies stand out for so many things on it’s own, but to a comic book character fan like me, I spent all additional viewings wishing it’s special effects were used on a DC JLA movie.

What is your favorite T-Shirt? Any T-Shirt with the Superman shield on it.

What is your Dream Car? The 60’s Barris TV show designed Batmobile. There’s a guy in Weston that owns one and occasionally will stroll around town in it, on Sundays.

What superpowers do you wish you possessed? The power to banish all computer e-mail spam and website screen pop-ups.

If you could banish anyone into the sun, who would it be?
Telephone telemarketers.

Most treasured possession? The love of God, my wife and children.