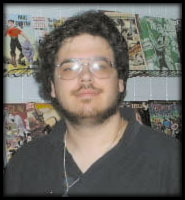 What will you spend your $25 on?
I’ll spend it on something that I’ve always wanted but never could justify. Either a big DC Archive book or a giant robot.

How long have you been visiting TATE’S?
Since about two Tate’s ago, when it was the “walk around the comics” with all the models setup everywhere.

How do you make a living?
Trying to become a Broward school teacher, currently.

If you could do ANYTHING, how would you make a living?
Language professor by day, comic book writer by night.

Do you have any pets? What kind & what are their names?
A black cat named Mordred. He flips from nice to psychotic without warning. Explaining the scars has been embarrassing.

Do you have any tattoos? What are they of? No. Unfortunately, then I couldn’t be buried in a Jewish cemetery. My friend, however, has a Count Duckula tattoo that’s pretty cool.

What was you favorite toy as a child? — Now? As a child, definitely Moss Man. He was a He Man figure who smelled like pine. My Dad was allergic. How cool is it to have Kryptonite for your Dad? — Grown up, it would have to be Power Traveller. He’s a huge skull-faced walking robot I picked up at Walmart. Comes with a bazillion rifles (labeled stunt guns) and bazookas, a truly staggering number of rubber combat knives, and a sticker that says “My Mission is World Peace.” He talks, explaining about world peace and destroying enemies. He has a briefcase labeled “Our Mission is World Peace” filled with grenades and sniper rifles. He kills people for peace and lays land mines for the children. He’s a walking political statement.

What is your most bizarre childhood memory? The time I saw Batman. I walked into my room, and there he was. The thing is, he was a blurry, non-moving lifesize version of a well-known Michael Keaton movie still, so I instantly knew even as a nine-year-old that it was an optical illusion of some kind like the ones in my young reader parapsychology books. He faded away after a minute or two. Still, even if I knew it was fake, I SAW BATMAN IN MY ROOM.
…Oh, and one time I slept through a getaway car being chased by helicopters crashing into our house.

What is the one thing that irritates you the most? Cell phones at movie theaters during films. God, I hate that. They make a pocket-sized jammer I’m thinking of buying, just to shut people up.

What is your favorite smell? Favorite smell is my fiance’s hair. After that, a really well topped pizza.

What do you collect? I’ve collected comics for years, along with role-playing games and action figures. I recently started collecting weird-ass Hong Kong flicks, especially Yuen Brothers Kung Fu comedies. They are unlike anything else in the world. Drunken Wutang/Taoist Drunkard, Wutang Temple/Duel of the Masters, there’s nothing like seeing ancient Chinese robot horses, hopping vampires, and the Watermelon Monster.

What are some of your hobbies? I play role-play games, Heroclix, and old video games like the NES. I read a lot. I try to teach myself Japanese, which is fun. Soon I might take Wing Chun.

Favorite Cartoon? It would have to be the Real Ghostbusters. It was written by the same guy who made Babylon 5, so it still holds up years later, especially the H. P. Lovecraft episode. The RGB Bogeyman is the scariest animated creature ever!

Favorite Movie? My favorite movies are the ones I can continually quote over and over again without people getting pissed, or can always watch when I’m down. So, definitely Big Trouble in Little China. Ghostbusters and Buckaroo Banzai are close.

What is your dream car? My dream car is the Spy Hunter car from the old arcade game. Currently, I’d settle for anything with a frickin’ tape deck.

What is your favorite Bumper Sticker? My Cthulhu magnet in the shape of a Darwin fish. Boggles the hell out of people.

What is your favorite T-Shirt? The coolest T-Shirt I have is a handmade zombie-in-a-trenchcoat one I got from Skull Kingdom called “Dead Old Bob.” It’s faded, but it’s wicked as Hell and unique.

What superpowers do you wish you possessed?
I want super-speed. I’d be able to get everything done, and I’d never feel swamped for time, low on gas, or out of exercise again.

If you could banish anyone into the sun, who would it be?
I’d definitely want to chuck the guy who gave me the face scar at the GWAR concert last year. Course, if I had the power, I’ve read enough Superman to realize I SHOULDN’T, but you know, he’d cry like a baby! Bill Jemas, too!

What Character on The Simpsons do you identify most with?
I really feel like Lisa sometimes. God, that sounds so wanker. Still true though.

Most treasured possession? It was the cup Weird Al gargled out of I caught at a concert, but my parents threw it away. Man, I was going to toast at my wedding with that.

Favorite Websites? I go on the Tangency forum onwww.rpg.net to chat a whole lot. www.badmovie.organd www.ebay.com keeps my Movie Nights full and torments my friends. www.x-entertainment.com is great if you love video games and old 80’s cartoons. 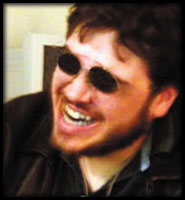 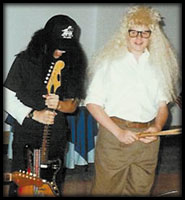 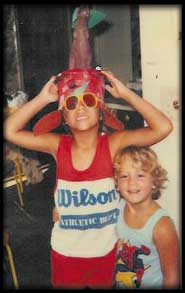