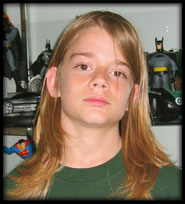 What will you spend your $25 on? Probably a Fantastic Four comic or New Avengers #1 (Sentry Cover).

How long have you been visiting TATE’S? I can’t remember how old I was, but it was at your older location.

How do you make a living? I manage to sell stuff at school and around my neighborhood.

If you could do ANYTHING, how would you make a living? Probably a scientist or an inventor of some sort.

Do you have any pets? I have a dog named Princess (I sometimes call her Piffy) and she is a Boston Terrier.

Do you have any tattoos? Nope, but if I could get one, I would have “One Nation Under Doom” from the 2099 series.

What was you favorite toy as a child? — Now? As a child, Megaman — Now, Marvel Legends

What is your most bizarre childhood memory?
When my bus driver looked like Stan Lee (he had the glasses and everything!)

What is the one thing that irritates you the most?Those little kids that after seeing the Spider-Man movie, they think he can beat anyone in the Marvel Universe, I blame Sam Raimi for that. I also didn’t like the way Dr. Doom got defeated in the movie (do you know how many times The Torch went up to Doom and he just put him out like that, because I lost count…)

What is your favorite smell? The smell of the pages of an old comic book.

What do you collect? Comics (mostly Marvel), Marvel legends and Axe cans.

What are some of your hobbies? Drumming, Existing (I’m really good at that one!), Hackey Sack (even though I’m not that good) and Comics.

What is your favorite Comic/Manga? Fantastic Four and Super Villain Team-Up

What is your favorite Anime/Cartoon? All of the old cartoons (Spider-man and his Amazing Friends, Fantastic Four).

Favorite Movie? Monty Python and the Holy Grail, hands down. (I couldn’t stop laughing when I saw the animated God!)

What is your favorite bumper sticker? Cthulhu for President.

What is your favorite T-Shirt? Depends, if its one that I own, then it would be my Green Lantern Symbol shirt. If its one that I don’t own (because I can’t find it in my size!), then the old green shirt with Dr. Doom’s face on the front.

What is your dream car? A Volkswagen bus or a Corvette

What superpowers do you wish you possessed?Before I choose, I’m gonna look at the basic superpower needs (flight and something to be able to be fired from your hand) so probably the power “COSMIC”.

If you could banish anyone into the sun, who would it be? George “Dubya” Bush

What Character on The Simpsons do you identify most with? Otto, the bus driver.

Do you have a homepage? Not me specifically, but my band does, it is www.sinsofsociety.com

Favorite websites? Marvel.com (gotta check up on the weekly comic supply) and ebay.com