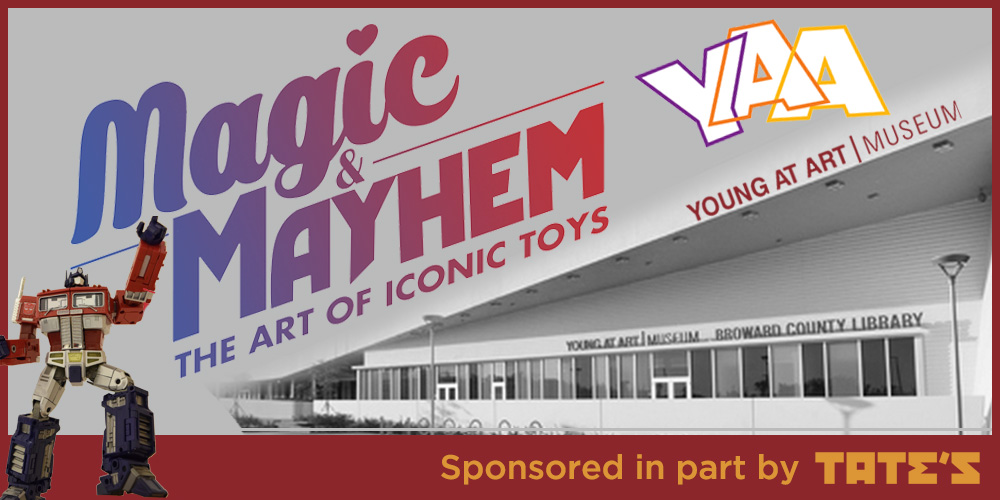 Magic & Mayhem is an exhibition exploring the cultural impact of iconic toys and the passion of collecting, curated by YAA’s design team in conjunction with artists and local collectors. The exhibit features two of the most iconic toys of the past decades – Transformers® and My Little Pony®.

Featured artists representing South Florida are Christopher Ian MacFarlane, Rob Cabrera, Samantha Salzinger, Amanda Covach and Tatiana Suarez. Other contributing artists include JeongMee Yoon, Ruben Santurian, Eli Barak, Autumn Casey, Charles Richard Clary and Oliver Laric. The exhibit includes two large wall murals painted by MacFarlane and Suarez. Another wall will feature a photographic display by Yoon, whose work documents children and their toy collections. Along the hallway leading visitors into the Knight Gallery, there will be several sculptural works, known as TRASH-formers, by Santurian, created from recycled metal and other materials. Barak and Casey will exhibit their various works throughout the Knight Gallery. Cabrera, Covach and Salzinger will all contribute to interactive experiences in the Orientation Gallery.

Interactive stations allow visitors to immerse themselves in the world of the collector. In the Collector’s Alley, displays of collections are intertwined with first-hand accounts from local collectors about how and why they collect. In the Toy Store, visitors will build their own Transformer-inspired bots, design their own Pony-inspired silhouettes and use iPads to create stop motion short films.

The Step Inside TATE’S interactive exhibit!

It is a little surreal, but you can “pretend” to step inside TATE’S as part of this exhibit! The photos below explain what that means pretty effectively. We hope that people actually come to visit us in REAL LIFE too after visiting the Young at Art Magic & Mayhem exhibit! 🙂

About Young at Art Museum: Young At Art Museum has been at the forefront of arts education in Broward County since 1989. Our dedication to championing the arts as part of a complete education has resulted in extraordinary accomplishments including designation as a Broward Major Cultural Institution and accreditation by the American Alliance of Museums, making Young At Art one of only 781 of the nation’s 17,500 museums recognized for excellence and leadership in the museum field.