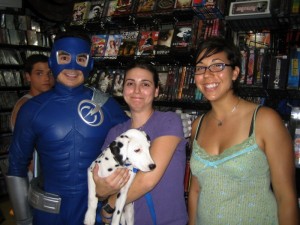 Meet the star of the film “SURGE OF POWER”

at Tate’s comics and you’ll have a chance to win passes to that night’s show!!

To add to the fun, Tate’s Comic’s will host the Sunday night show at Gateway 4. Prizes will be awarded to those dressed in the most clever superhero or villain costume (think original). Tate’s Comics will award a $50 Gift Certificate as a Grand Prize, $25 to first and second runners up and Sunrise Cinemas will award a pair of tickets to the Gateway 4 every month for 6 months as part of the Grand Prize package!

The camp sci-fi film has been acclaimed by press as “campy, cult science fiction – tightly packed & wholesome” -Gene Hetzel, Pulp Magazine
“If the film rolls your way, go check it out. It was funny, and the guys get an ‘A’ for effort.” -Gashlycrumbkid New2Comics