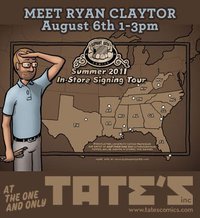 Claytor is most well-known for publishing his all-ages autobiographical comic book series entitled And Then One Day under the moniker Elephant Eater Comics. He recently announced the final line-up for his ambitious Southeastern United States Comic Book Tour, which will take him to 12 different retailers and universities in 12 separate states. Upon completion of this tour, Claytor will have signed his self-published series of comics in all 48 contiguous states.

Additional tour and book information can be found at Claytor’s website: www.ElephantEater.com