Visiting us all the way from Japan, Kohei Nishino will teach you skills to create your very own manga!
All materials will be supplied. Limited seating.

Earlier the same day, Kohei Nishino will be giving a lecture at the Morikami Japanese Gardens in Boca Raton. 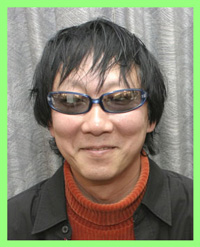 He currently runs the weekly manga Web site Hana Maru Weekly (http://www.cybermanga.com). He has also been active overseas, having had his “NAGI” serialized in Chibi-Pop Manga. Kohei is also responsible for nurturing young artists as a Associate Professor at the Arts Department of Kyoto Seika University.

Konohana Sakuya is the alias of the working partnership between two comic artists, Kohei Nishino and Tsugumi Nishino. In 2002, the duo was awarded the Grand Prize of the 1st World Manga Faithful Readership Award, sponsored by publisher Shinchosha for their series “Encounter.” It was also given the jury’s choice award by the Cultural Agency in the Manga Category of the Media Arts Festival Awards for fiscal 2003. Since August 2004, the duo has had its latest work, “The Lights,” serialized in the monthly version of the Shonen Jump magazine.