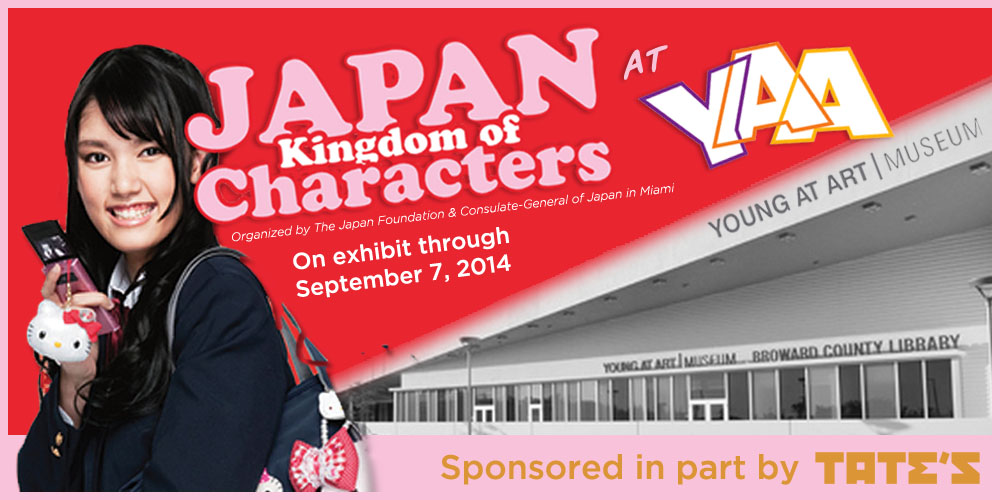 On exhibit through September 7, 2014 at the Young at Art Museum in Davie.

Organized by: The Japan Foundation & Consulate-General of Japan in Miami.

As Hello Kitty! celebrates its 40th anniversary, Young At Art Museum will open international traveling exhibition JAPAN: Kingdom of Characters, showcasing the history of Japan’s affinity for and fame of its world-renowned and beloved characters, beginning in the 1950s with Astro Boy through to the 2000s with Pokémon and more.

• Meet Hello Kitty, Ultraman, Gundam, Pikachu, Rei Ayanami from Evangelion, Namisuke, and Sento.
• Travel through time with the history of characters from the 50’s to the 00’s.
• Watch examples of animations with iconic characters from each decade.
• Learn how Japanese people are inspired by characters and how they welcome them in their daily lives.
• Take a look at a typical Japanese teen’s bedroom filled with colorful cuteness!
• Watch animation created by current independent artists using net-based programs.
• Meet several character figures at the Akihabara section.

About Young at Art Museum: Young At Art Museum has been at the forefront of arts education in Broward County since 1989. Our dedication to championing the arts as part of a complete education has resulted in extraordinary accomplishments including designation as a Broward Major Cultural Institution and accreditation by the American Alliance of Museums, making Young At Art one of only 781 of the nation’s 17,500 museums recognized for excellence and leadership in the museum field.

On May 5, 2012 Young At Art embarked upon a new stage in its history. Through a public/private partnership with Broward County, Young At Art opened a groundbreaking new 55,000 sq. ft. museum and public library, certified as Gold LEED (Leadership in Energy and Environmental Design) by the U.S. Green Building Council. The Knight Foundation named Young At Art’s new museum “as one of the most transformative arts initiatives in South Florida.” Through innovative exhibition galleries, professional art institute studios, workshop classrooms and teen center serving 250,000 annually, the new Young At Art is changing the way children, families and educators use art to understand the environment, explore world cultures, discover the impact of art throughout history and understand the important role art plays in early child development.

Our setup at the exhibit VIP Members opening event on July 5, 2014! Free pocky and comics for everyone!