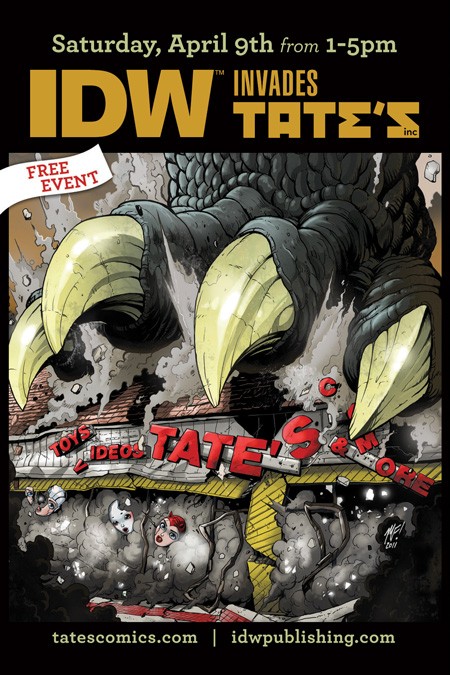 Introducing… Publisher’s Day at TATE’S, where we fly in the TOP BRASS from leading comic book companies to meet and talk with you, our loyal customers!

• Have your Portfolio Reviewed by Chris Ryall, Editor-in-Chief of IDW Publishing
• Schmooze with Eric Powell, Eisner Award-Winning Artist and Writer
• Get your awesome TATE’S Godzilla Variant Cover signed by artist Matt Frank!
• Pick the brain of Dirk Wood, IDW’s Director of Marketing, on the direction of IDW titles future, present and past.

About IDW Publishing: Founded in 1999 and recognized as the #4 comic book publisher in the U.S. They currently publish a wide range of comic books and graphic novels.

Matt Frank: Comic artist best known for his rampages through the worlds of giant monsters. Contributing work to IDW’s Transformers series and Wrath of the Titans: Cyclops. Matt was most recently the lead artist for IDW’s Godzilla Store-Crushing Cover project, as well as subsequent incentive covers for Godzilla: Kingdom of Monsters. Matt is also currently working on a web comic series titled Giant Monster Zak!

Dirk Wood: Director of Retailer Marketing at IDW, Dirk Wood has over 17 years of experience in the comic industry, including a long stint as Marketing Director for Dark Horse Comics, after starting his career in retail as Operations Manager for Things From Another World. Currently best known as the comic narrator of IDW’s section in Diamond Previews.